The EU Green Week is one of the main European events dedicated to environmental policy, which occurs yearly. In 2022, the priority was given to “the European Green Deal – the EU’s sustainable and transformative growth strategy for a resource-efficient and climate-neutral Europe by 2050“. In that context, from May 30 to June 5, 2022, various virtual events, two days of conferences and several virtual exhibitions were organised. 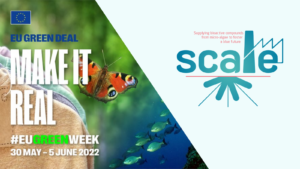 The EU Green Week is the key event in the EU environment policy calendar in early June. This annual opportunity  to debate and discuss European environmental policy attracts policymakers, leading environmentalists, stakeholders and other interested parties from across Europe and the globe.

Down the years, EU Green Week delivered on its objectives, improving the understanding of EU environmental policies, feeding into debates about their development, and improving the overall image of the EU among citizens and stakeholders around Europe.

This year, the European Green week  focused on the ‘European Green Deal’. It was articulated around a high level debate on what happens to the EU environmental policy in times of crisis and three important aspects of the transformation – circular economy, zero pollution, and biodiversity. Dedicated events were organized throughout the week by the European Commission, but also by independent entities.

SCALE is an interesting example of how the bio-based industry is helping to replace non-renewable fossil resources with “waste” and accelerate the chemical industry transition to circularity.

SCALE will allow a greater independence from raw materials by supporting the emergence of microalgae as a commercial renewable feedstock to be used as a natural alternative to synthetic compounds, animal extracts and petroleum derivatives in the food, food supplements, feed and cosmetics sectors.

The project will help to reduce greenhouse emission, as the cultivation of microalgae does not emit any greenhouse gas, and partners will investigate ways to optimize energy efficiency and to reduce carbon emissions from the industrial activities of the plant.

SCALE will aslo help to replace fossil-based material with biobased, renewable material (contribution to the EU’s 2050 long-term strategy for a climate-neutral Europe), by offering credible, novel, natural and renewable microalgae-based alternatives to fossil-based products in cosmetics (petroleum-based ingredients used for texturing and silicone oils), food supplements and feed (synthetic carotenoids), bringing the same or better properties with less i

The upscale and exploration of new high-value ingredients from microalgae

Update after 1 year of work

Construction of SCALE plant: the work has begun!

19 novembre 2021
We use cookies on our website to give you the most relevant experience by remembering your preferences and repeat visits. By clicking “Accept All”, you consent to the use of ALL the cookies. However, you may visit "Cookie Settings" to provide a controlled consent.
Cookie SettingsAccept All
Manage consent

This website uses cookies to improve your experience while you navigate through the website. Out of these, the cookies that are categorized as necessary are stored on your browser as they are essential for the working of basic functionalities of the website. We also use third-party cookies that help us analyze and understand how you use this website. These cookies will be stored in your browser only with your consent. You also have the option to opt-out of these cookies. But opting out of some of these cookies may affect your browsing experience.
Necessary Toujours activé
Necessary cookies are absolutely essential for the website to function properly. These cookies ensure basic functionalities and security features of the website, anonymously.
Functional
Functional cookies help to perform certain functionalities like sharing the content of the website on social media platforms, collect feedbacks, and other third-party features.
Performance
Performance cookies are used to understand and analyze the key performance indexes of the website which helps in delivering a better user experience for the visitors.
Analytics
Analytical cookies are used to understand how visitors interact with the website. These cookies help provide information on metrics the number of visitors, bounce rate, traffic source, etc.
Advertisement
Advertisement cookies are used to provide visitors with relevant ads and marketing campaigns. These cookies track visitors across websites and collect information to provide customized ads.
Others
Other uncategorized cookies are those that are being analyzed and have not been classified into a category as yet.
Enregistrer & appliquer